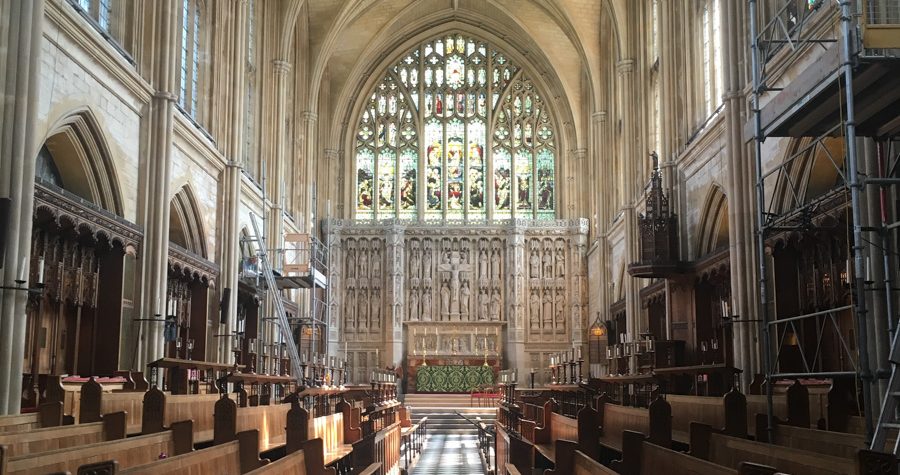 It has been a busy year in the fine art conservation department.  We have been dealing with several projects to include the restoration of paintings at Cheltenham College Chapel and undertaken in-situ condition surveys, studio assessments and various other works.

We have been involved in the conservation programme of the Cheltenham College Chapel paintings for some years, and last summer we completed works to three more of the marouflaged canvases by James Eadie Reid dating from the early 20th century.

The paintings depict biblical scenes and are executed in oil paint on canvas.  Moisture ingress has resulted in several issues to include flaking, loss of paint layers, delamination of the canvas and blanching.  Further damage was caused by abrasive cleaning or aggressive removal of varnish in the past.

The treatment of each painting differed in detail depending on their individual condition and requirements, however in principal treatment involved surface cleaning, the consolidation of flaking paint, stabilisation of the delaminated canvas and filling and retouching.  A reversible, final varnish was applied to provide uniform saturation and long term protection.

The removal of surface dirt was a particularly satisfying process, as it restored the original luminosity of paintings and re-focused the scenes on the most significant figures.

Workshop treatments included paintings from the Usher Gallery in Lincoln but also several items from a private collection that had been devastated by fire.

Surveys involved UV light assessment as well as microscopic analysis of paint samples.  Further advanced analysis has been commissioned for the next phase of investigations.