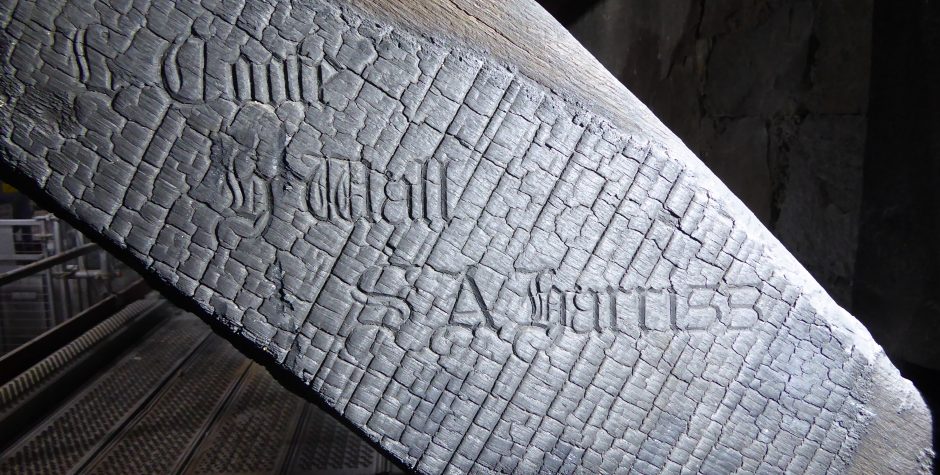 From Devastation to Conservation, St John the Baptist church, Royston

Fire is the most destructive threat any historic building faces. What the flames do not destroy is all too often ravaged by the water used to extinguish it, and smoke and moisture damage can spread far beyond the fire itself. Treatment of fire damaged stone, plaster, painted surfaces and indeed paintings, furniture and personal belongings is therefore an all-too-common necessity. Conservation of very deeply charred timber and particularly degraded linseed putty is, however, more unusual.

There are no clear and comprehensive statistics on the incidence or rate of fires in historic buildings, as they are not separately counted within Home Office figures. One must hope the incidence is falling as risk assessments result in necessary upgrades to electrical and heating systems, and higher levels of planning and precaution during any construction or repair works.  But whilst detection and control systems have vastly improved in recent years, retro fitting in historic buildings is both financially and practically very challenging. Therefore, it is not unusual for fires to reach a significant size before they are detected and extinguished. 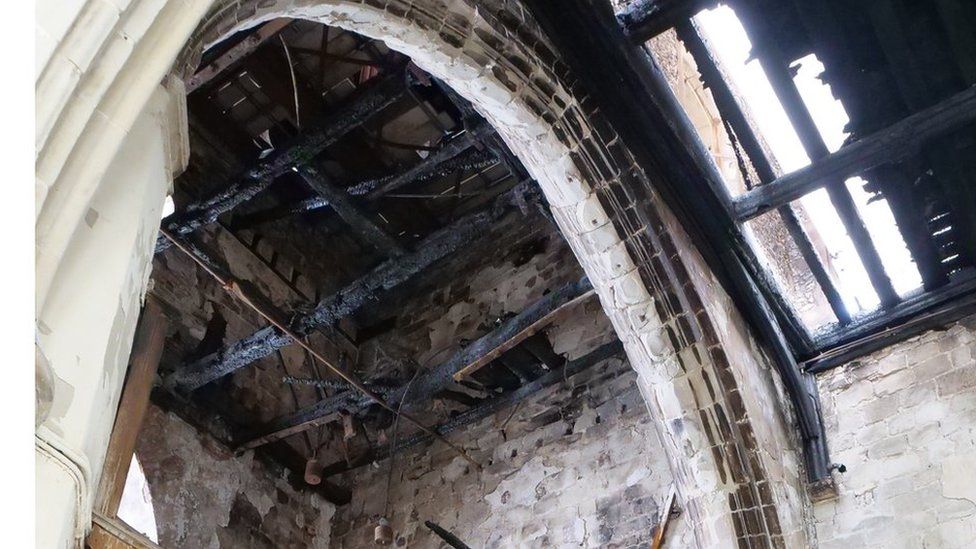 The cause of the fire which devastated the Church of St John the Baptist, Royston in December 2018 has never been fully identified, though early concerns of arson were ruled out.

Hirst Conservation were asked to assess and later conserve an unusual collection of inscriptions on the timber beams as well as the carved bosses.  These inscriptions record the names of those involved in phases of prior building work of what was originally a 12th century Augustinian Priory. From the 1601 re-reroofing by ‘C.R.’, through to the carpenter Robert Leete of 1786, the church wardens and carpenters of 1808, and a full gamut of architects, clergymen, church wardens and workers of 1951. The inscriptions also wonderfully reflect the craft of the individuals, with the earliest formed in lead, some painted, others carved in rudimentary fashion presumably at their own hand, or much more deliberately and presumably by planned commission. The carpenters of 1808, though apparently not highly skilled letter carvers, used the same linseed oil putty found in other fills and stopping repairs to inlay their simpler carvings. 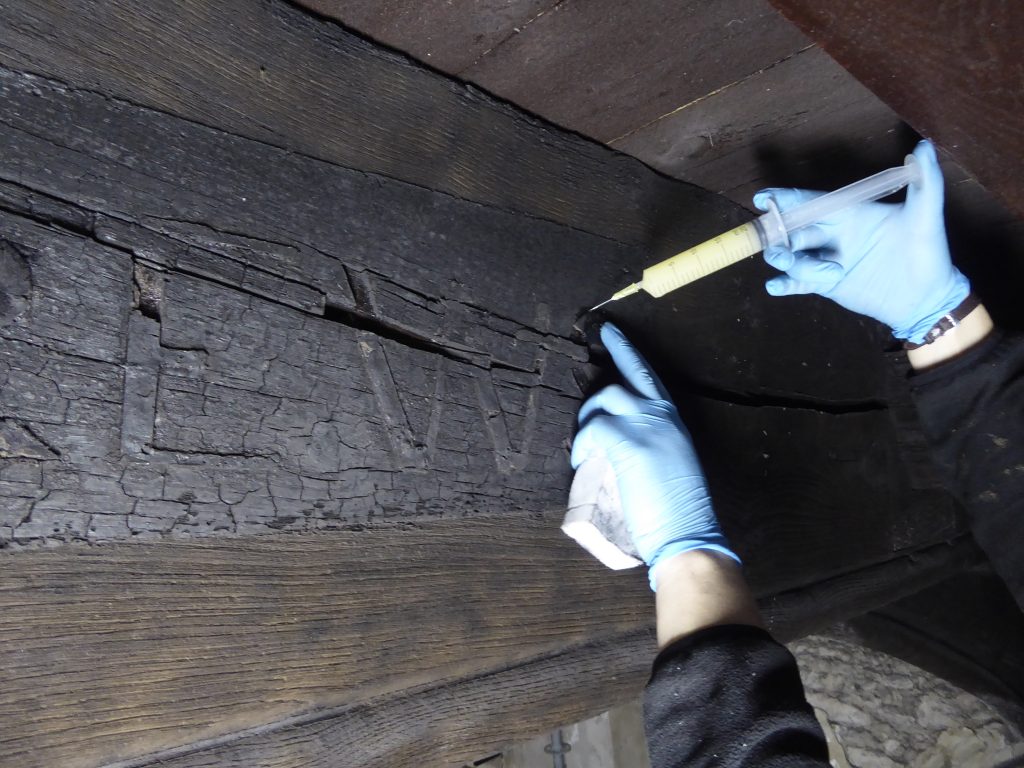 Whilst the dry ice cleaning carried out to the bulk of the timber beams enabled effective removal of the charred timber, this would have resulted in the complete loss of these inscriptions as the depth of charring extended up to 8mm; well beyond the paint, the linseed oil putty inlay or the depth of carving.

Inscriptions were therefore carefully consolidated and cleaned according to the nature of the inscription material; from Paraloid B72 a copolymer resin, through Klucel hydroxypropylcellulose a non-ionic water-soluble cellulose ether, to very traditional protein-based fish glues. High film strength or more impermeable adhesives or consolidants are avoided as these tend to form an inappropriate capping material which is likely to be more unstable or cause further damage in the long term. 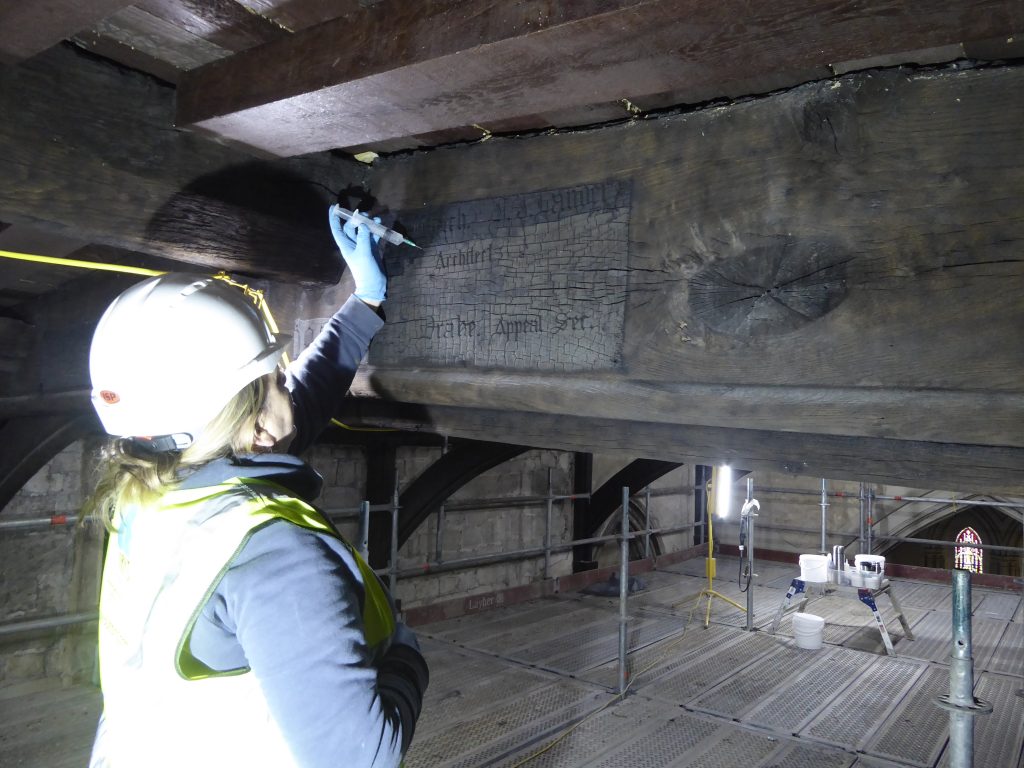 Whilst considered consolidation can return the structural integrity to the material and ensure its stability, the process of charring is irreversible. In some contexts, it is appropriate to fill and retouch the surface to either visually lessen the appearance of damage, or effectively reproduce the original appearance. Here the decision taken with architects and representatives of the client was to conserve elements in their current condition; the conserved inscriptions now stand testimony not only to the previous generations, but also their survival in this blaze.

Works throughout the building are continuing, now in the second phase of works under Bakers of Danbury. See the church website for more information or to support their ongoing fundraising efforts http://www.roystonparishchurch.org.uk/about/building-project/