Architectural paint research can often seem to be the invisible specialism but it’s where a conservation project often begins.

In October 2020 Hirst Conservation were approached by architects Donald Insall Associates on behalf of the Wentworth Woodhouse Preservation Trust (WWPT) to undertake sampling of the clock dials and weathervane to the north pavilion of the mansion at Wentworth Woodhouse. The WWPT had been able to secure Historic England funding from the Culture Recovery Fund to add the north pavilion to the Phase II works of the mansion project that were nearing completion.

There are two clock dials to the pavilions, one facing the park and the other facing the house.  The inspection of the north pavilion east (or park) facing clock revealed a lead substrate to the dial with the applied decoration now in a very poor condition with extensive paint delamination noted. Evidence of more significant paint archaeology was seen to recesses of the hands and the timber surround.  There was an exciting moment when our senior architectural paint researcher Charlotte Owen and Woodhead Group site manager, Andy Stamford found evidence of gilding to the timber surround to the south facing dial.

Getting the samples back to the Hirst laboratory enabled assessment under stereo microscope in order to mount what was likely to reveal the most complete paint archaeology when polished and examined in greater detail. The results were interesting. 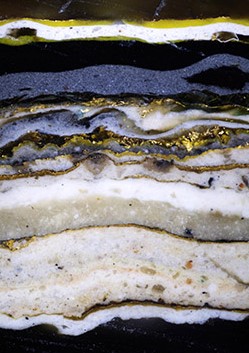 The tiny samples taken from the hands revealed a number of schemes of gilding with the timber surround samples showing gold leaf applied over cream colour lead based oil paints (see above). The black that was seen until recently was only a later introduction.

Analysis of the samples from both clock dials show only later paint films indicating they had been stripped. This would most likely correspond to graffiti found on the masonry below one of the dials to indicate that gilding had taken place in 1958.

Analysis of samples from the weathervane held in storage revealed far more detail with repeated use of gold leaf applied over a blue paint film seen to a number of the samples. In the example shown below there is a clear repetition of the use of blue with the thinnest of gold leaf seen to a number of schemes. Gold leaf can be extremely difficult to uncover with mechanical exposure through overlying paint layers so cross-sectional analysis of decorative schemes is vital in recording paint stratigraphy. 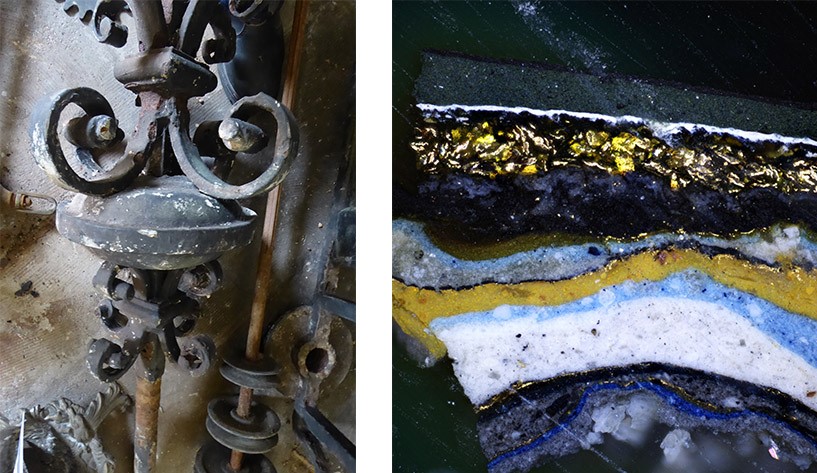 Following analysis of the samples a return visit to site to undertake limited exposure of the schemes to the weathervane was completed. The restoration of the ironwork and clock dials has been informed by the paint research. Thanks to additional funding from the Goldsmiths’ Company Charity, the weathervane is now restored to its lofty position above the cupola of the north pavilion and a local horologist has generously donated his skills to restore the turret clock to working order. 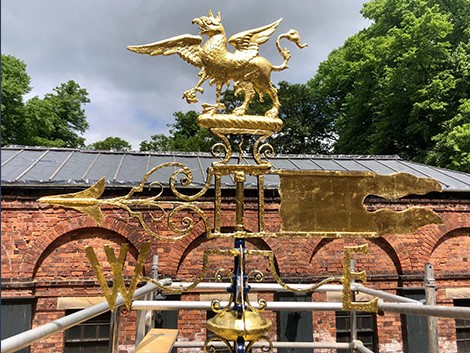 When asked what architectural paint research is, we describe it as decorative surfaces archaeology. We are looking back through layers of history not just at colour but at paint media, special finishes such as gilding or glazes and extra detail such as the nature of dirt films. Understanding past interventions is also significant as it underpins the microscopic analysis. So little details such as noticing graffiti on masonry all help to build up the picture so that conservation can inform the restoration of our built heritage to ensure our buildings can be enjoyed for many more years to come. 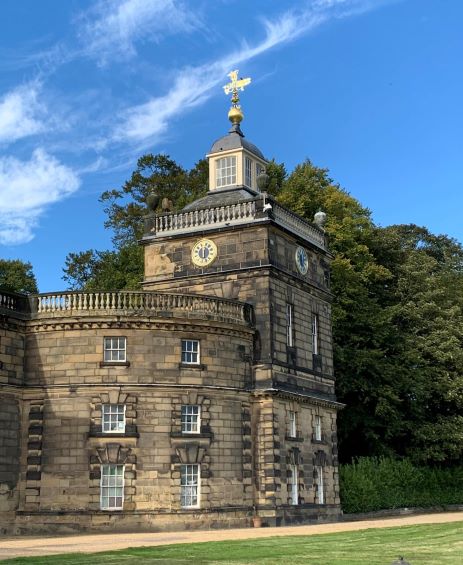 The north pavilion following completion of the works, October 2021