As a new employee to Hirst Conservation Ltd being involved with this task was a great start.

Few locations offer a better view of the Humber, modern architecture, a glimpse of the past and future of Hull.

BMMJV Limited (BAM Nuttall Mott MacDonald JV) commissioned the works as part of a major flood defence project in Hull.  As part of these works, the statue of William de-la-Pole and the Voyage sculpture required cleaning, removal and storage.

A tower scaffold was erected to gain full access to the statue to facilitate cleaning by the DOFF system. Once completed we then needed to excavate around the base to enable safe removal of William De La Pole.

The statue was securely fastened within the scaffolding to await the lift. The crowds gathered (at a safe distance) and held their breath as a likeness of the first mayor of Hull was lifted into the air and transported to its set down location where it was boxed in and secured for transportation to its storage site. 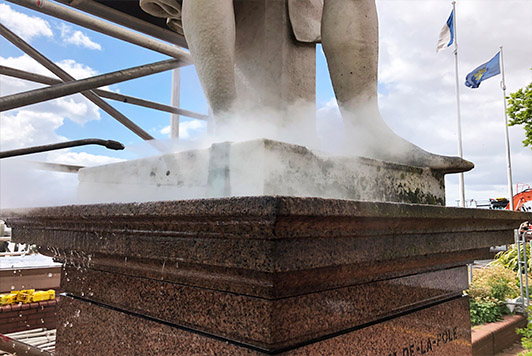 The Voyage sculpture was excavated around its base to reveal its fixing points. Once the statute had been braced and secured the fixings were released. Again, the crowds gathered and given the nature of what the statue represents all sensitivity was given as it was lifted, moved, secured and transported to its storage facility.

A job well done with Hirst Conservation, BMMJV Limited employees and the public looking forward to the return and reinstatement of both pieces back to their incredible location right on the waterfront.