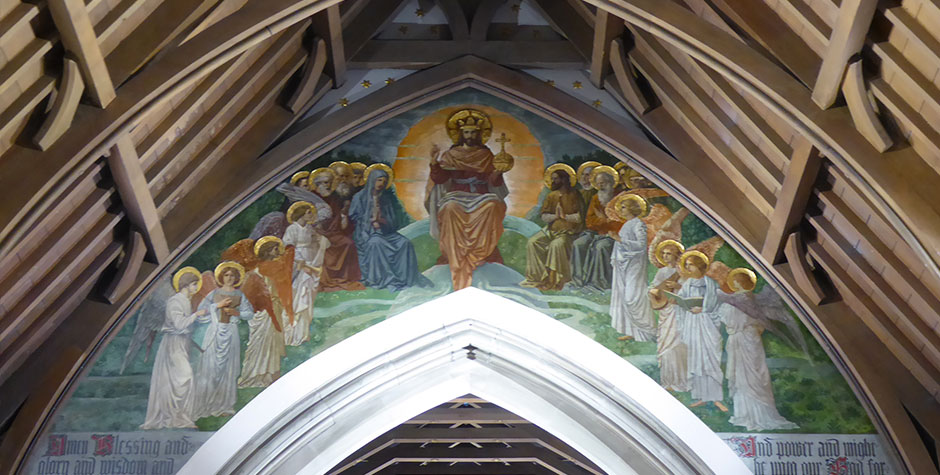 Conservation and repair work was much needed for this grand 19th century wall painting that had a history of water ingress and inappropriate restoration. The painting sits above the chancel arch in 6the Grade II listed All Saints Church, Thelwall. The work followed two condition assessments and technical analysis and was undertaken in stages to allow complete carbonation of lime plaster repairs before any recreation of painted decoration could safely take place.The church was built between 1843 and 1890 and the ornate decorative scheme was designed and completed around 1896 by Messrs. Shrigley and Hunt, of Lancaster and London. Damp penetration within the chancel wall was a recurring issue mentioned in the church records from approximately 1930s. Several campaigns of repair and redecoration were undertaken over time, resulting in a complete overpainting of the interior except for the chancel arch painting and two smaller areas. Repointing of the east gable of the nave in lime mortar in February 2018 was the just one of the many improvements made to the chancel wall. 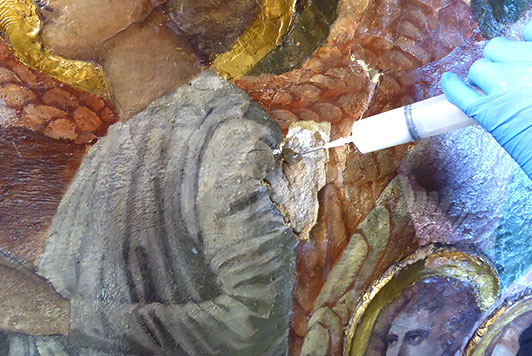 Analysis and recording identified several areas of friable plaster, as well as overpaint and unsuitable reconstructions. Temporary surface protection was applied to sections of friable plaster and around the areas of unsuitable plaster to be removed, to enable repairs in the form of grouting, fracture filling and re-plastering to be undertaken. Nano-lime products and lime-based mortars and grouts with reduced water content were used for the repairs and for setting thick and distorted paint flakes. Smaller paint flakes were consolidated using a thermoplastic adhesive. Dirty varnish was removed along with the modern areas of unsightly overpaint using solvents and solvent gels. Watercolours and Paraloid B-72 with dry pigments were used for the retouching of small losses. Larger areas of reconstruction on carbonated repairs were executed in acrylic paint. Conservation works were finished in November 2019 and we later held an open evening at the church, providing a great opportunity to engage with the Thelwall community and allow us to present the project to the entire parish. 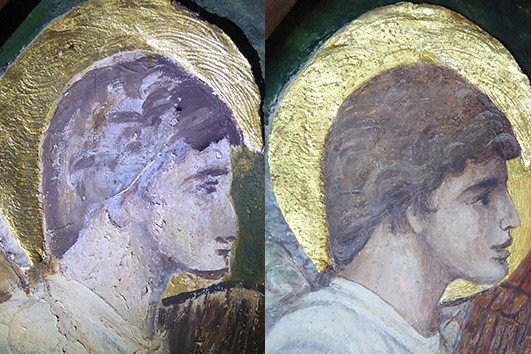 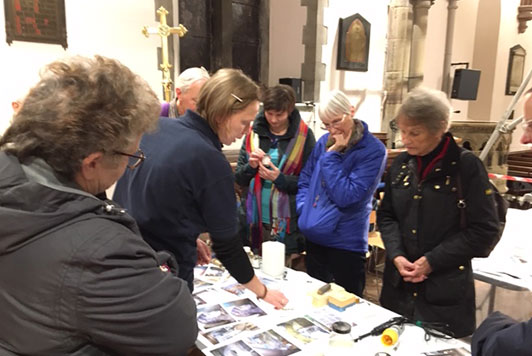